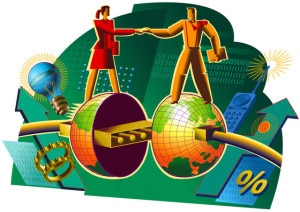 Egypt is a country in which 81% of 15-to-19 year-old young women have undergone genital mutilation and where 90% of women wear a headscarf or hijab. It has, for seven years, been a signatory to the U.N. sanctioned Committee on the Elimination of Discrimination against Women (CEDAW). Other member states include such women-friendly nations as Ghana, Saudi Arabia and China. Requirements of signatory states is to “achieve a balance between men and women holding publicly elected positions” and to “modify the social and cultural patterns of conduct of men and women, with a view to achieving the elimination of …stereotyped roles for men and women.”

Despite being signed by President Carter, the United States Senate has never approved the agreement, much to the disappointment of many elites on the Left. Last December the Democrat-controlled Senate, against the urgings of President Obama, blocked ratification of the U.N. Convention on the Rights of Persons with Disabilities (CRPD). Why would a Democratic Senate vote against their President on an issue that is sensitive and sympathetic to disabled persons?  And why would the United States, as fair as any country in its treatment of women, not sign CEDAW? The answer lies in skepticism for stealth-like transnationalists – people, as former Senator John Kyl described in an interview with Sohrab Ahmari in the Wall Street Journal, “who are convinced they are right about important issues.” While what they say sounds good and their intentions may be honorable, their methods violate fundamental foundations of our Constitution – the separation of powers, federalism and representative democracy. Better questions would be: Why don’t other nations follow the lead of the United States when it comes to issues such as women’s rights and the disabled? Why should the U.S. follow the lead of non-democratic nations in promoting concepts they don’t practice? It is the hypocrisy and disingenuousness of these global elites that thoughtful people should find troubling.

The term transnationalism dates back to the early 20th Century. It grew out of the heightened connectivity between people and receding economic and social significance of borders between nations. That sense of global unity was challenged with the rise of nationalism, which led to World War’s I and II. Those two wars gave substance to the concept that nations could no longer operate in isolation, but must also be respectful. Thus, was born the League of Nations and subsequently the United Nations, as answers to ruinous nationalism. There is much in transnationalism that is good. It is always better when citizens of different nations and cultures meet and talk rather than fight. In business, transnationalism recognizes the evolving production process, in which various stages of manufacturing can occur in various countries, with the aim of minimizing costs, so as to improve the competitive nature of products.

But it is in the matter of laws, rules and behavior where transnationalists become a risk to our sense of democracy, as in the two treaties cited above – CEDAW and CRPD. How can nations that knowingly mistreat women sign treaties agreeing not to do so? They can because the meaning of the term “state practice” has changed, as it applies in international law. According to Mr. Kyl and two Hudson Institute associates writing in the current issue of Foreign Affairs, “the state-practice requirement can be satisfied with words – that is, by proof not that the states have actually complied with the rule, …but [because] officials have merely spoken in favor of it.” This is what has allowed non-democratic states like Saudi Arabia and Egypt – states that discriminate against women and other minorities – to be signatories to acts like CEDAW and CRFD. It is not what they do; it is what they say. It is the very opposite of moral lessons embedded in Christian-Judeo teachings.

In the same issue of Foreign Affairs, Mr. Kyl, along with Douglas Feith and John Fonte discuss transnationalism. It is seen as an answer to isolationists who have favored a “Fortress America” policy (though the truth is there are very few isolationists anymore.) Proponents see transnationalism as evolving from a growing interconnectedness that should dissolve international boundaries. They claim that “national sovereignty is growing increasingly problematic, impeding the achievement of multinational solutions to public policy issues.” It sounds good, like something a “flat-world” needs. But what it entails is giving up sovereignty – a sovereignty based on the principal that ultimate power resides with the people and the ballot box. In a transnationalist world, power of the people is given up to an elite who purports to know what is best for us. The concept of us American citizens being subject to rules, the making of which we have no direct input is contrary to the very idea of our democracy.

When the British government claimed the right to tax the colonists without their representation in Parliament, American colonialists rose up in revolt. In like manner, why should a sovereign people be subject to non-elected leaders, especially to those whose sense of right and wrong is totally alien to our culture? Should the President of the United   States have to sit in judgment by unelected U.N. officials? As incredible as it sounds, that was the finding of American transnationalist, Philip Alston, professor of international law at NYU and the U.N.’s special rapporteur on extra-judicial killings. He had found that Mr. Obama’s use of Drones “untenable,” and that he (the President) was violating international law. No matter what one thinks of Drones or Mr. Obama, it is unthinkable that any President, elected by the American people, should be subject to rules of an organization that does not represent the people of the United   States. Our Constitution allows for the American people, through our elected representatives, to remove a President should it be shown that he or she had violated our laws. We should not have to bow to the demands of some outside group.

The G-20 is getting set to back a major overhaul of international taxation designed to eliminate loopholes that enable some large companies to keep their tax bills low. That may be an ideal, but it ignores the fact that tax policy is one way that countries compete. Competition is what generates improvement, in businesses and government. Price fixing, which is what this would amount to, is a short term answer to revenue shortfalls. But it would reduce creativity over the long run, hurting consumers.

The concern of transnationalism is its effect on democracy. The Obama Administrations has already accelerated the trend toward centralized control and away from a government empowered by the people and their representatives. He has appointed more czars than any of his predecessors, and he has empowered agencies run by his appointees who are not subject to Congressional scrutiny, to enact and enforce laws, prime examples being the EPA, HHS and the IRS. He takes pride in the fact. In speeches, he has promised to end-run Congress, if they prove obstructionist. At Knox College last week, Mr. Obama said, if necessary he would use his “executive authority” to bypass Congress to push his agenda. It may be expedient, but it is at odds with the concept of representative democracy. Transnationalists would further isolate us (the people) from those who would make decisions on our behalf – the claim being they are better qualified. It is a form of elitism that was common in 18th Century England and, in fact, in America, when women, Blacks and non-property holders were not allowed to vote. Jon Kyl, in his interview with Sohrab Ahmari, said about transnationalists: “…they are in too much of a hurry to mess with the difficulties of representative government to get their agenda adopted into law – or they know they cannot win democratically. So they look for a way around representative government.”

At its root, transnationalism is an extension of what we see today as an elite comprised of big government, big business, big unions, big banks and mainstream media, all aided and abetted by friends in Hollywood and the entertainment industry. It is a belief in size, that might makes right. It is infested with cronyism, seemingly purified by belief in a ruling class who feel they can make better decisions for the people than the people can for themselves. Non-conformists are seen as a threat, as are entrepreneurs and others that stress the value of the individual over the power of the institution. A manifestation of this attitude can be seen in the government’s decision to indict the hedge fund SAC, despite no criminal activity; yet they encourage policies that have allowed large banks like Goldman Sachs, Citigroup and J.P. Morgan to become even bigger and riskier, despite their need for government bailouts five years ago. This belief in a “ruling class” is in part responsible, in my opinion, for the decline in social and economic mobility in the U.S. Transnationalists tend to trivialize their opponents. Transnationalism is an attitude sanctimonious and dangerous – sanctimonious because leaders are patronizing toward the (supposedly) less-well-informed masses, and dangerous because it stifles initiative and threatens democracy as we know it.

Eight years ago, Tom Friedman wrote a highly successful book, The World is Flat. It was a book that trumpeted globalization and the riches that would accrue to the citizens of the world. He was right. The world’s middle class has increased, helped by the rise of capitalism and the fall of C