Trump, Globalization, and Populist Challenges: An Interview with Dan Mitchell

Daniel J. Mitchell, an American economist based in Washington, D.C., and former Senior Fellow of the Cato Institute and the Heritage Foundation, visited Vienna last week to give a talk on “Donald Trump’s Tax Reforms.” Over a classic Viennese Schnitzel, Kai Weiss talked with him about Trump, globalization, populism, and pro-market reforms in the US and around the world. 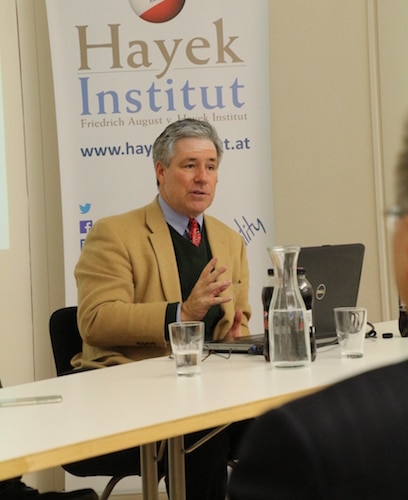 Kai Weiss: You are here in Vienna to talk about Donald Trump’s recently passed tax cuts. Could you just shortly sum up your thoughts on them?

Dan Mitchell: The first thing to understand is that it is not a tax cut in the long run. Starting in year ten it’s a revenue increase, so it’s really a revenue neutral tax reform in the long run with a small-size tax cut in the beginning. To answer your question: It’s a very good plan, much better than I thought, because it does some important things: it lowers the corporate tax rate significantly in the United States, it modestly lowers some other taxes as well – but really the lower corporate tax rate is as we say the crown jewel of the Trump plan. It pays for that by restricting the state and local tax deductions, because under our federal system, states and local governments levy their own taxes, and those used to be deductible – you could use those taxes to lower your central government tax burden. Now there’s a limit on that. It also restricted business interest deductibility, so companies won’t be incentivized to issue as much debt. And also, it changes the inflation measure, because in all likelihood we have been overstating inflation, and so there is a new measure which will be used to adjust tax brackets for inflation. So, is that a simple, pure flat tax, which is the gold standard for tax reform? No. But is it a good step in the right direction? Yes.

After one year of Trump, would you say he is better than Obama, better than Bush? How is he doing so far?

Bush and Obama were almost completely bad, both of them were very statist, big-government politicians. With Trump it’s random: on some issues like taxes and regulation he’s good, on other issues like trade and government spending he is bad. He’s sort of a populist. You have to be careful with that term, because it can mean different things to different people, but he’s a populist in the sense that he always wants to do things that people will like. People like tax cuts, people like government handouts, at least some people like protectionism in the favored industries, so a lot of the things he’s doing are exactly what you expect a traditional politician to do who wants to try to be liked by voters. But that’s still better than Bush or Obama. Bush had a tax cut, but it wasn’t nearly as good as Trump’s tax cut. Obama did nothing good, nothing but a relentless expansion of the burden of the state.

There was an article in The American Conservative recently, where the argument was made that Trump so far is the most libertarian President since Calvin Coolidge, who of course was the head of state from 1923 to 1929, and is today seen as one of the most pro-market politicians in US history. Would you agree with this or is that rather exaggerated?

I think it’s very much exaggerated, because Reagan was much better than Trump. Now having said that, other than Reagan and Coolidge every Republican President in the past 120 years has been bad, so I would modify that statement to “He’s the second most libertarian President since Coolidge” – actually, let me take that back and elaborate: Bill Clinton turned out to be a pretty good President, maybe not because he wanted to, but with the combination of the Republican Congress – Newt Gingrich, and the 1994 revolution. So I think the statement in The American Conservative was an exaggeration, but Trump on economic policy has so far been somewhat good. Now he could wreck everything with a lot of protectionism, and he’s already started out 2018 in the wrong direction, so we’ll have to see.

In the run-up to the 2016 elections, Libertarian Presidential candidate Gary Johnson was asked who his favorite political leaders in the world are – and he had no idea. Are there any good political leaders right now?

I actually wrote a column about that, and I pointed out that the reason Gary Johnson had trouble figuring out who was a good President or who was a good political leader in the world was because there are no good political leaders in the world, or very few. I wound up listing some of them, but most of them were retired – like Mart Laar in Estonia, José Piñera in Chile. You know, it’s very difficult to think of a politician who is currently in office who has a good, admirable track record.

Historically seen there are classic positive examples like Thatcher and Reagan of course, but is there a sort of underrated leader who you would say stands out?

Well, Bill Clinton was underrated, but I don’t really want to list him, because he probably was good only because of Congress – and in our separation of powers system in America, the powers of a President are much less than the powers of a Prime Minister. Ivan Mikloš in Slovakia was very good in the early 2000s. He then made a big mistake when his government supported the Greek bailout, and that caused the government to collapse, so he made a big mistake there … Who else is a good political leader? Economically I guess you have to say the leaders of Hong Kong and Singapore have been good in the sense that they haven’t done anything stupid, but otherwise …

So it is tough?

It is tough, I mean Gary Johnson hesitated because it is difficult to find a good politician. I mean, there have been some good politicians in New Zealand: Roger Douglas with the Labour Party, and then Ruth Richardson with the National Party. There were some good politicians in Australia. There was a lot of good free-market reform in the world in the 80s and 90s, some of it was just driven by jurisdictional competition which of course is something I very much like. But it happened, whether politicians did it because they felt they had to, or they did it because they believe in the right thing. But in terms of really good, strong, free-market, libertarian ideals, no, Gary Johnson had trouble answering because it’s very hard to find any.

And in countries like Hong Kong or Switzerland you often don’t even know who the politicians are.

Right, that actually reminds me, I listed Kasper Villiger. He was never the actual head of state or anything like that, but he was the Finance Minister, and he was very, very good in Switzerland.