Tunisia’s leaders shrug off economic freedom for the people 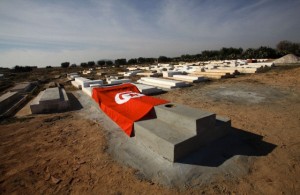 15 Jan 2011, Tunisia — On December 17 2010, Mohamed Bouazizi, 26, an unemployed graduate set himself on fire in the when police tried to prevent him from selling vegetables without a permit and who had his scales confiscated in the Tunisian southern city of Sidi Bouzid. Mohamed was the only one to bring money with his job to his family. He died at the beginning of January. — Image by © Antoine Gyori/AGP/Corbis

For ordinary people of the Middle East and North Africa, the events of the Arab Spring were driven as much by a frustration at the lack of economic opportunity as they were a discontent with authoritarian, repressive regimes in the region. After all, the popular uprisings were triggered by the self-immolation of Mohamed Bouazizi, a Tunisian fruit vendor who had been repeatedly harassed by local authorities. When he was prohibited by the officials to sell fruits and vegetables, with his goods confiscated, his life — and the lives of those who were dependent on him — were instantly ruined.

Unfortunately, three years later, things are coming full circle in Tunisia. As the country’s National Constituent Assembly is nearing a vote on the new Tunisian Constitution, a heated debate arose on January 9 about an amendment to Article 48 of the document, which deals with individual rights and freedoms. This would embed the protection of economic freedom in the constitution and prevent instances of arbitrary harassment — which motivated Bouazizi’s desperate act — but also curb the rampant populist overregulation that fuels unchecked corruption by government officials.

Unfortunately, the amendment was rejected in a vote held on Friday, with only 93 voices in favor of it, while 109 were required. For its opponents, such as member of parliament Samia Abou, this amendment would “impose an economic orientation of savage neoliberalism” on the country. Mourad Amdouni, another parliamentarian, warned that “if you pass this article, it would be the greatest betrayal made to the Tunisian people and the revolution.”

Considering the origins of the Tunisian revolution, such statements are a travesty. Bouazizi died because he demanded freedom of economic initiative. It was precisely a lack of freedom of enterprise that stifled Bouazizi — just like the vast majority of Tunisians.

Close to 95 percent of Tunisia’s economic landscape consists of microenterprises. These face formidable barriers to entry and growth. According to the World Bank’s Doing Business report, starting a business has become more difficult compared with previous years. Obtaining a simple construction permit requires 94 days and costs close to 256 percent of average annual income in the country. Tunisia also ranks 109th in the world in the access of its entrepreneurs to credit.

The reason why the Mediterranean tradition of entrepreneurship and economic freedom has not been translated into institutions and policies facilitating free enterprise is simple. Open markets would threaten the sectors that have been nationalized in the past and in which the government and its cronies enjoy monopoly privileges and other forms of government protection. Ben Ali’s Tunisia was characterized by a system of cronyism and clientelism. Today, some patrons are perhaps being swapped for others, but the underlying logic of a small elite living at the expense of the general public remains unchanged.

The failure of the “freedom to work” amendment risks compromising one of the last chances that Tunisia has to uphold the message of the events of the Arab Spring. Its critics are mistaken if they think that the amendment would somehow transform Tunisia into a country of 19th-century unfettered capitalism. The amendment, for example, would not prevent the right to strike, as some have claimed, since the latter is also guaranteed by the constitution.

While Tunisia is seeking international aid and foreign investment to finance its economic growth, the anti-business attitudes prevailing in its political arena are sending a very bad signal about the country’s direction. If Tunisia’s policymakers fail to grasp that development requires enterprise and economic initiative, the country’s credibility among international donors and potential investors will be damaged. More seriously, by refusing to stand up for economic freedom, the Constituent Assembly has betrayed exactly what Mohamed Bouazizi fought — and died — for.

Emmanuel Martin is an analyst for LibreAfrique.org and director of the Institute for Economic Studies – Europe. Dalibor Rohac is a policy analyst at the Center for Global Liberty and Prosperity at the Cato Institute.

Emmanuel Martin is an analyst for LibreAfrique.org and director of the Institute for Economic Studies – Europe

The views expressed on AustrianCenter.com are not necessarily those of the Austrian Economics Center.
hayek_admin2014-01-27T09:38:05+01:00