Over the first weeks of 2019, the European Commission has made a strong push to replace unanimity votes by member states on tax issues with qualified majority voting. In our new study The EU’s Push to Abolish Unanimity on Tax Policy Should Be Rejected, we present six reasons why this would be a major mistake. Download the study (including sources) or read it below:

The necessity to have unanimity in the Council on so-called “sensitive” issues, including tax policy, has been controversial on the European level for many years. With plans to reform the EU and move forward on integration efforts, the European Commission has stated clearly ever since the Brexit vote that member states should think about giving up on the last remnants of unanimity votes. Instead, qualified majority voting (QMV), i.e. a support of 55 percent of the states, representing at least 65 percent of the EU population, should increasingly be used on all issues, even on those that are particularly controversial. This, says the Commission, is necessary to have “a Union that delivers.”

Commission President Jean-Claude Juncker has made this clear in consecutive State of the European Union speeches, and the Commission’s work program for 2019 also added “more efficient decision-making in key fields of taxation and social policies” as an important issue that needs to be tackled. But a recent push over Christmas and in January 2019 drove home that getting rid of unanimity votes on tax policy is indeed a priority for the Commission.

On December 20, it started an initiative for “more efficient EU law-making procedures,” and followed this up on January 15 with a 13-page Communication “Towards a more efficient and democratic decision making in EU tax policy.” In both, the gradual abolishment of unanimity votes on tax issues was called for. In the latter document, a four-step path was put forward on how this would be politically feasible – by starting out with QMV in areas such as tax evasion and carbon or environmental taxation, and moving ever closer to the complete disbandment of unanimity.

This was coupled with an analysis published one day earlier claiming that “shifting to qualified majority voting has been shown to change negotiating dynamics in the EU,” and therefore, QMV should be introduced in “areas such as Common Foreign and Security Policy, taxation or social policy, which are central to addressing today’s biggest societal challenges.”

While it is understandable that EU institutions as well as some member states are tired of being held back by naysayers in their integration plans – a condemnation made consistently by the Commission – and while it is true that decision-making processes could be accelerated by abolishing unanimity votes (notwithstanding that speeding up those processes would not make the decisions more correct by itself), the plans of the EU would still be highly detrimental. It is not by accident that tax policy (as well as the other fields the Commission is looking at) is considered a “sensitive” matter.

Indeed, introducing QMV on taxation would include grave dangers and problems. In contrast to the Commission’s 6 reasons to transition to qualified majority voting decision-making at EU level, here are six reasons why abolishing unanimity votes on tax policy would be a mistake.

1. A Major Intrusion on Sovereignty

That a government can determine its own tax policy is a precondition for the state’s very sovereignty on fiscal and economic matters. If it can’t set its own tax base and rates freely, it will have a difficult time implementing the policies it wants, since it will always be dependent on the decisions made by someone else – in the case of a full-throttled implementation of QMV on the European level, by the qualified majority of member states as well as the proposals made by the Commission and the discussions conducted by the European Parliament. Indeed, handing tax policy to the European level, even if only partially, would be a major intrusion on national sovereignty. And while internal limits like domestic tax limits might work if written in a nation’s constitution, a third player intervening in domestic affairs or introducing its own taxes on the back of a country’s tax base is surely a different matter – and one that can be expected to cause major backlash.

In all of this, the Commission has a disturbing definition of what sovereignty even means. For them, “it is fair to ask whether a situation where one Member State can block initiatives wanted by the 27 other ones is beneficial to national sovereignty of all the 27 other ones.” But sovereignty means that one can precisely do that: as the Cambridge Dictionary defines it, sovereignty is “the power of a country to control its own government,” i.e. to have the supreme power on what to do regardless of what this means for outsiders. Of course, this can result in bad policy – and this is why issues such as tax policy need to be further decentralized as far as possible, so that those in charge are more incentivized to implement good policy. It certainly does not mean that other countries can force their sovereignty on another’s simply because it is in their interest.

2. A Single Market Against Competition

One additional curious statement made by the Commission is that introducing QMV on tax issues would help in bringing about a “Single Market in Taxation.” Harmonizing tax rules would finally create a fair tax system across the Continent. “National tax policies can have important effects on other Member States and Union policies,” and member states are currently constrained “in their capacity to raise revenues to finance expenditure programmes in line with their national preferences.” Setting the same rules and levels would merely add another component to the Single Market then.

While this argument may still be made in streamlining tax laws per se, especially in the way they are being raised, which would make declaring taxes easier for international corporations, it would hurt the common market if it means actually harmonizing tax rates or introducing new taxes, such as a digital tax. The Single Market was created to ease trade across borders and reduce or eliminate barriers, not to introduce taxes and create new barriers for European citizens and businesses to do business.

3. Tax Harmonization Through the Back Door

The concern that abolishing unanimity would open the door for tax harmonization across the line, including personal income and corporate taxes, and thus, eliminating tax competition in Europe, has always existed. Undoubtedly, countries like Ireland, Estonia, and Latvia have profited from their competitive tax systems – systems, they fear, they would have to give up for some more akin to high-tax countries like France and Germany. 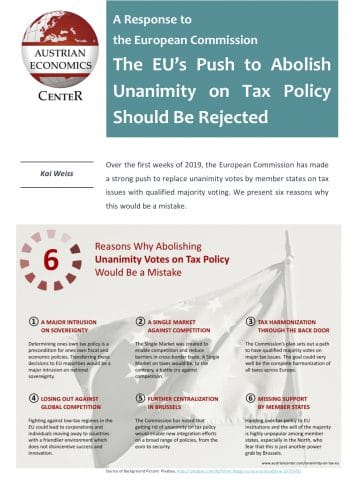 The Commission writes in its documents that this is not a goal: “Nor does it aim to shift towards a system of harmonized personal and corporate tax rates across the EU.” Nonetheless, other parts of the documents show a different picture. For instance, the Commission states that moving to QMV would make it possible to avert “harmful tax competition and aggressive tax planning,” and bemoans the fact that “as the tax base becomes more mobile, Member States are increasingly constrained in the execution of their fiscal sovereignty.” Of course, the goal to establish a “Single Market in Taxation” leads to