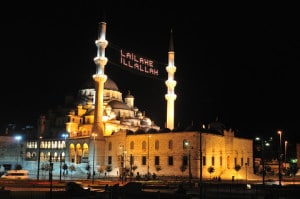 Former Prime Minister of the UK, Tony Blair, said earlier this year that

the threat of … radical Islam … is growing. It is spreading across the world. It is destabilising communities and even nations. It is undermining the possibility of peaceful co-existence in an era of globalisation. And in the face of this threat we seem curiously reluctant to acknowledge it and powerless to counter it effectively. 1

The tragic events in Iraq, where the Islamic State in Iraq and the Levant (ISIS) is currently mounting an offensive against the government of the Prime Minister Nouri al-Maliki, certainly appears to be consistent with Blair’s concern—namely that “the battles of this century … could easily be fought around the questions of cultural or religious difference.”2 But to what extent do Blair’s claims reflect the experience of political transitions throughout the Middle East and North Africa (MENA)?

The rise of political Islam into prominence poses important questions both for people in the MENA region and for policymakers in the West. Since 9/11, the thrust of Western foreign and security policy toward the MENA region has aimed at containing radical forms of Islam. In practice, that often meant cozying up to authoritarian regimes, as long as they were secular, since these were seen as superior to their theocratic alternatives. When the Egyptian military brought down President Mohamed Morsi in early July 2013, there was a sense of relief among many in Washington. American neoconservative commentator Bill Kristol, for example, articulated it in the following way:

I think they prefer the military to rule to the Muslim Brotherhood ruling—I think an awful lot of people in the region prefer that. An awful lot of the Arab governments prefer it. And it’s not clear to me that we shouldn’t prefer it.3

One of the dominant narratives of political development in the MENA region sees religion in politics as a symptom of backwardness, and as something that can be expected to wither away as nations grow more prosperous, modern, and democratic. It also associates religiosity with a set of theocratic beliefs on how society ought to be governed. Naturally, the prominence of explicitly religious parties in the Arab world then becomes a cause for concern.

This account of religious politics is not completely wrongheaded. Religious identities matter to people, and religions—including Islam—often have normative implications about how the society ought to function. Given that religious beliefs seem to be at the core of Arab societies’ cultural identity, it is not entirely implausible that the rise of Islamist politicians in the aftermath of the fall of secular authoritarian regimes in the region is a simple response to the popular demand for more religious content in politics. If that narrative is true, then the prospects for secular liberal democracy in the region may be very limited.

Is such pessimism justified? The standard narrative leaves unexplained two major facts, which raise doubts about its relevance to current events in Muslim-majority countries. First, individual religiosity is a poor predictor of voting behavior and policy preferences. Second, electorally successful parties in Arab countries typically have a track record of successful provision of social services.

In Muslim-majority countries, individual religiosity does not reliably predict voting behavior. Whether one is religious or not says little about whom one is going to vote for in the election or what one thinks about specific policy issues. That ought to shed some doubt on the role of Islam as a source of a specific ideological agenda. To be sure, political Islamists may have specific ideas about what Islam implies for public policy and governance, but these considerations do not seem to be behind the electoral success of Islamic political movements.

Studies of individual-level data from the Palestinian territories, Morocco, Algeria, and Egypt show that Islam has only a small impact on political attitudes, especially on attitudes toward democracy, and only very little explanatory power in accounting for support for democracy in Arab countries.4 In Lebanon, religiosity is not a significant predictor of political activism.5 In the world’s most populous Muslim-majority country, Indonesia, religiosity was not significant in explaining voting behavior in the elections of 1999 and 2004,6 and neither does an “Islamic ideology” explain the support for Indonesia’s religious parties.7 In Central Asia, religious affiliation does not affect preferences for democracy and political Islam.8 Even in Central Asia, “there is little difference between Muslims, the Orthodox, and non-believers … Even more strikingly, the most observant Muslims are almost as pro-democratic as those who are non-observant.”9 Furthermore, data from the Arab Barometer show that whether one believes that religion should have a place in politics says little about what one thinks about different policy issues.10 Opinions about public policy tend to be associated with a number of factors, including socioeconomic status (income, education, marital status, employment, etc.), but the self-reported attitudes toward the presence of Islamic religion in politics have typically very little explanatory power over specific policy questions.

Why does the success of Islamists seem to be linked with the provision of social services and local public goods? After all, if the conventional account were correct and people in Arab countries were simply yearning for the presence of Islamist policy platforms in politics, there would be no reason to expect Islamists to be any more active in the provision of social services, local public goods, and so on than other political groups.

Yet, throughout the MENA region, Islamists have been involved conspicuously in the provision of such services, including healthcare, education, welfare assistance, and humanitarian aid. In Algeria, Islamic groups were among the first and most effective organizations to help the victims of the Algiers earthquake in 1989.11 In Morocco, the Justice and Development Party (PJD) itself is not active in the provision of social services, but its umbrella organization, the Unity and Reform Movement (MUR), is most notably active at the local and municipal level. In Tunisia, the precursor of the leading Islamic party Ennahda—the Movement of the Islamic Tendency—has developed a network of social service provision and built a presence at the local level of government. Furthermore, it has traditionally operated numerous civic associations,12 including sporting clubs, and organized collective weddings, free of charge. In Egypt, “the Muslim Brotherhood runs 22 hospitals and has schools in every governorate in the country. The organization also runs numerous care centers for poor widows and orphans as well as training programs for the unemployed…. Of the roughly 5,000 legally registered NGOs and associations in Egypt, an estimated 20 percent are brotherhood-run.”13 In Jordan, the Brotherhood operates the Islamic Hospital in Amman14 and the al-Afaf Charitable Society, providing collective weddings and matchmaking services.15 In Yemen, the Islah party has created welfare, religious, and educational organizations that deliver social services. Most notably, the Islah Social Welfare Society engages in health awareness campaigns, religious education, illiteracy eradication, and relief donations. Finally, in Lebanon the “Social Unit” is one of the eight key elements of Hezbollah’s structure.16 It provides social welfare services as well as technical help and has set up institutions from agricultural cooperatives to cultural centers.17 The same goes for Hamas in the Palestinian territories, where Islamists run relief programs, fund schools, orphanages, mosques, healthcare clinics, soup kitchens, and sports leagues.

These two facts suggest that the appeal of the substantive content of religion on voters is not the only relevant factor in Arab countries. Besides its theological content, religion also serves as a node of social organization. The organizational characteristics of religion can play an important role in mitigating some of the pressing political problems in the region.

Specifically, religious politics can be seen as a solution to the problem of credible electoral commitment that plagues new and emerging democracies. Voters prefer political groups that can make credible promises to supply public goods after the elections, but such political groups are rare in the aftermath of regime changes. Politicians in new and emerging democracies are seldom seen as capable of making credible commitments, which requires establishing reliable channels of communication with voters and methods of tracking promises and deliverables.

The typical outcome18 is that politicians make promises about redistribution to a small number of political cronies—patrons—who can themselves make credible promises to their clients, while siphoning away some part of the money for themselves. As a result, new and emerging democracies will suffer from patronage—overly large and wasteful redistribution programs and a lack of government- provided public goods.

Patronage-based politics may dissipate over time as politicians build a reputation that enables them to make credible commitments concerning the provision of public goods. Alternatively, however, patronage can create disincentives for politicians’ investment in their ability to make credible promises to the electorate, resulting in prolonged periods of bad govern