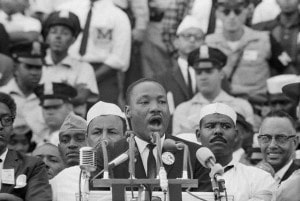 August 28, 2013 – August 28, 1963 was a seminal moment in the lives of those of my generation. That was the day the March on Washington for Jobs and Freedom took place and Martin Luther King Jr gave his iconic “I Have a Dream” speech. It was an event, interestingly, that almost didn’t happen. Neither the Urban League nor the N.A.A.C.P. were willing to provide support. President Kennedy, according to David Brooks in yesterday’s New York Times, argued that the march would hurt chances of passing Civil Rights legislation.

But march they did and speak he did. The Reverend King spoke in front of the Lincoln Memorial, before 250,000 people on a late summer day with the humidity comfortably low. Re-reading the speech a few days ago, one is swept up with the beauty and force of his words. Some of his word choices indicate the passage of time, but his message resonates today, just as it did fifty years ago. That he was a man of God is obvious in his choice of metaphors – “…the manacles of segregation and the chains of discrimination.” “Let us not wallow in the valley of despair.” His words sang with his dreams, with eight paragraphs beginning, “I have a dream.” It was a powerful speech whose words have grown even more compelling over the years.

What followed was a series of civil rights’ legislation. The following August, President Johnson signed the Civil Rights Act of 1964 which gave Federal authorities the right to enforce integration. The following July, the Voting Rights Act of 1965 was signed. Interestingly, according to Thomas Sowell, a higher percentage of Congressional Republicans than Democrats voted for both Acts.

Four years and eight months after the “I Have a Dream” speech, Martin Luther King Jr. was dead at the age of thirty-nine, shot by James Earl Ray, while on the balcony of his room at the Lorraine Motel in Memphis, Tennessee. One week later, on April 11, 1968, President Lyndon Johnson signed the Civil Rights Act of 1968, prohibiting discrimination in the sale, rental and financing of housing.

It was ironic that the Reverend King, who had been an advocate of peaceful resistance, should die in such a violent manner. For in that same speech on the Washington Mall, he had said, “In the process of gaining our rightful place, we must not be guilty of wrongful deeds…We must forever conduct our struggle on the high plane of dignity and discipline…we must rise to the majestic heights of meeting physical force with soul force.” Sadly, that was not to be. For a segment of the population so long deprived of their rights that are embedded in our Constitution, it was too much to expect that change would, or even could, come peacefully.

Nonetheless, there has been progress over the past five decades, which would have pleased Mr. King. “Whites only” signs outside restaurants, motels and hotels no longer exist. Voting is a right that all citizens, regardless of color, enjoy; though spurious questions have arisen recently regarding voter ID cards. Barack Obama sits in the White House. Eric Holder serves as Attorney General. President George W. Bush was served by two African-American Secretaries of State – Colin Powell and Condoleezza Rice. Four years after the March on Washington, President Johnson appointed Thurgood Marshall to the Supreme Court. Today, Clarence Thomas, appointed by George H.W. Bush, sits in the seat formally held by Justice Marshall. Forty-four African-Americans serve in Congress today, compared to just five, fifty years ago. These people, and thousands of others, Republicans and Democrats, owe their success to the bravery and dedication of Martin Luther King Jr. and his followers. While most African-Americans align themselves with the Democrat party, they are an independent group who should not be taken for granted by any Party. Articulate spokesmen, like Thomas Sowell, Alan West, Wayne Dupree, Crystal Wright, Shelby Steele, Star Parker and Walter Williams promote conservative values.

All is not perfect. Affirmative action has helped millions of Black youth attend colleges and universities and has generally been positive. While the population of African-Americans in the U.S. has doubled since 1963, the numbers with bachelor degrees has grown fourteen-fold. But Affirmative Action has also had the result of placing some youths in courses for which they are not prepared – a controversial theory advanced in Richard Sander and Stuart Taylor Jr’s book, Mismatch. Affirmative Action can create and/or raise expectations. It can also cause a sense of personal inadequacy – that admission was due more to color rather than ability. An unintended consequence has been de facto segregation (this time self-imposed), with dorms designated solely for Blacks. According to a recent article in the Los Angeles Times, the University of California at Berkley has “Black” dorms and, like most universities, “African American Theme Programs.” In a meritocratic world, such living conditions and academic majors are, frankly, unfair to African-American students who graduate into a multi-racial, but largely white, world.

Politically correct universities do the same with women, offering majors in “women’s studies.” Instead of color or gender-blind universities, these policies propagate segregation. A study by Russell H. Fazio, an Ohio State professor of psychology, which was referenced in the New York Times four years ago, looked at interracial roommates at Ohio State and Indiana University. The data found that “black freshman who came to college with high standardized test scores got better grades if they had a white roommate – even if the roommate’s test scores were low.” Perhaps, the study speculated, “having a white roommate helps academically prepared black students adjust to a predominantly white university.” One might draw the inference that it might also better prepare them for a work environment that is also dominated by whites. Segregation, no matter the reason, is unhealthy. We are all better off when removed from our comfort zones. Yet we stay in them.

While we think of the Reverend King’s march on Washington as being principally to provide equal access to the nation’s lunch counters, schools and housing, the title of the march mentioned “jobs” before “freedom.” According to an article that appeared in the weekend edition of the Wall Street Journal, 42% of Blacks lived in poverty in 1966; in 2011, 28% did. Nonetheless, unemployment among African-Americans today is twice that of White Americans. While incomes have improved, they still lag that of their White brethren. Additionally, African-Americans are far more likely to be incarcerated than any other racial segment. Most important, they suffer unfairly in terms of education, in that they dominate inner city schools – especially those with the worst academic and highest arrest records.  Cancelling the Washington D.C. voucher program in 2009 saw an African-American President throw a kiss to the National Education Association (NEA) and a slap at the 8000 (mostly African-American) students who had entered lotteries that would have allowed 2000 students to receive grants of $7,500 each to attend a private or parochial school. Late last week the Department of Justice sued to block 34 school districts in Louisiana from handing out private-school vouchers, which would have allowed poor, minority children to escape failing public schools. Why would an African-American Attorney General encourage such actions that hurt the very people he claims to support? The only logical explanation is union opposition. Mr. King would he disappointed.

A cultural change has been coursing through our society affecting all of us.  The Reverend King would despair to hear the lyrics in songs sung by rappers, like Snoop Dogg and Jay-Z that contain language which is obscene and a message that is explosive. In his speech, Martin Luther King spoke of peaceful protest, and said that he had a dream “that my four little children will one day live in nation where they will not be judged by the color of their skin, but by the content of their character.” That line, in my opinion, was the keystone of his speech. We must ask: would he be happy with the character of those rappers, or with the character of the three teens who murdered an Australian exchange student in Duncan, Oklahoma because they were “bored.” What would he say to the two young men who beat to death an 88-year old World War II veteran in Spokane? In both cases, which occurred within days of one-another last week, the murders were committed by teens – themselves victims of a disturbing trend toward unwed motherhood and single parent homes. And the list goes on.

As an example of the crassness that underlies today’s culture and media, and the election of those like Bob Filner and Eliot Spitzer. The Associated Press each day publishes “10 things to know today.” On Monday, the list included “Miley Cyrus grabs the limelight.” This was in reference to her performance at the MTV Video Music Awards where her provocative song, “We Can’t Stop,” was performed while wearing a “nude” bikini and carrying an over-sized foam finger. Not on that list was the awarding of the Medal of Honor to Staff Sergeant Ty Carter for his heroics in Afghanistan. Another example would be the newly released movie; “The Butler,” directed by Lee Daniels. It tells the story of Cecil Gaines who served seven Presidents as White House butler over thirty-four years. However, Mr. Daniels decided that the real history of