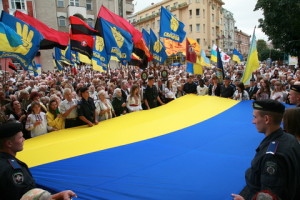 Russian President Vladimir Putin says the May 25 presidential election in Ukraine is a “step in the right direction.” He also called on pro-Russian separatists in eastern Ukraine to postpone a May 11 referendum on independence. (Putin’s second statement is odd, since without Russian support and the Russian army positioned close to Ukraine’s border, the separatist movement would not have grown so fast.)

Yet a few days before Putin offered his advice, Russian Foreign Minister Sergey Lavrov said it would be absurd to hold elections in a country where a low-intensity armed conflict is going on. Surely, Lavrov cleared his statement with Putin.

Why did the Moscow line change so soon?

In his essay “Generalissimo Stalin and the Art of Government,” the philosopher Isaiah Berlin examined how unpredictable, despite its party line, even the Communist Party of the Soviet Union could be. It is hard, Berlin wrote, to predict anything when all power and decision-making are in the hands of one person or group. The Politburo followed not theoretical Marxist goals but practical ones. As Deng Xiaoping said, “It doesn’t matter whether a cat is white or black, as long as it catches mice.”

When so many people these days — more than 140 million in Russia and, sadly, more than 40 million in Ukraine — depend on the emotions, state of mind, mood, and whims of just one person, the situation is dangerous. It’s obviously dangerous for Ukrainians. The Russian people will suffer from American-led sanctions, but the government will blame the hardship on the “bad West.”

Before Putin made his statements, Russian politicians, journalists, and artists who back the president actively supported the pro-Russian separatists in Ukraine. Now suddenly — remarkably — they too have have changed their minds. After Putin’s statements, Alexandr Sidyakin, a deputy from ruling party, United Russia, tweeted, “To be short: Putin is right.” A few weeks ago, more clever pro-Putin writers released a letter expressing total support for the Russian ruler. In Russia there is no place for a personal opinion, but there is a big place for loyalty.

Under these precarious circumstances, Ukraine is trying to keep its balance on a “thin red line” (this expression from the Crimean War and Battle of Balaklava refers to a “last chance”) and achieve the stability that would enable it undergo much-needed reforms. A successful presidential election would be the most important step in that direction. But there are few candidates who are not associated with the last government and who are ready for liberal reforms needed to make the country economically and politically independent of Russia.

Putin’s sudden conciliation should be taken with skepticism. As Berlin characterized the old Stalinist strategy, “In revolutionary situations, liquidate your now worthless allies and then advance and strike; in non-revolutionary situations, accumulate strength by ad hoc alliances, by building popular fronts, by adopting liberal and humanitarian disguises, by quoting ancient texts which imply the possibility, almost the desirability, of peaceful, mutually tolerant coexistence.”

There are dangerous days ahead.

The views expressed on AustrianCenter.com are not necessarily those of the Austrian Economics Center.
hayek_admin2014-05-15T11:01:15+02:00