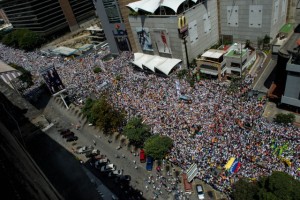 Hugo Chávez used to say that the new political movement he started in Venezuela was “21st Century Socialism”. Unfortunately, like its predecessors from the 20th century, the socialism of our time is also eager to kill its civilian citizens.

For the past three weeks Venezuela has witnessed a series of demonstrations carried out mostly by students. The catalyst of these demonstrations was the sexual abuse of a girl at the University of Táchira. However, the reasons for widespread social discontent can be traced back to two related phenomena.

On the one hand, Venezuela’s economy is in dire straits. Although the country is oil-rich and the international price of oil has done nothing but go up since 2002 the country is bordering economic collapse. Milk, flour or insulin are articles impossible to find. Last year there was even a “toilet paper crisis” due to a severe shortage of that item. Moreover, the official exchange rate of the Venezuelan bolivar versus the US dollar is approximately 12 to 1. Yet, due to controls and regulations that make it almost impossible for citizens to buy foreign currency, a black market has logically appeared. In this informal market the exchange rate is of 100 bolivars per 1 US dollar.

On the other, since Hugo Chávez took office in 1999, the political climate of the country has become strained. What in the past was the strongest democracy in Latin America and a safe haven for political refugees has eroded rapidly into a populist and autocratic illiberal democracy. Slowly but surely each and every remnant of the republican order was replaced by an overarching state power which promoted the persecution and harassment of the opposition. Thus, the state launched an assault on Venezuela’s civil society and mutual respect, freedom of speech and democracy were the first victims.

Facing this new reality, Maduro’s reply to the protests could best be described as the firm response from a weak leader. Like Assad in Syria or Yanukovych in Ukraine, Maduro’s reaction was a textbook example of what authoritarian leaders do when in trouble -censorship and repression. Consequently, a complete blackout about the demonstrations was imposed on the local news stations. National media censorship was complemented with the banning of the regional news channel NTN24 and the expulsion of CNN journalists out of the country. What is more, many cities are experiencing a total Internet and communications shut-down.

Repression, in turn, was handled both by police and military forces and by revolutionary militias. Several times unidentified men have opened fire on unarmed demonstrators causing the death of many. Leopoldo López, an opposition politician and leader of the protests, was recently arrested. The government accuses him, among other things, of homicide, arson and terrorism. If convicted, he faces countless years in prison.

In the meantime, the rest of the countries in South American have taken a faint hearted and timid position at best. The case of Brazil is particularly sad. Being a self-proclaimed regional leader, Brazil’s silence is only comprehensible as a severe case of moral deafness.

Argentina’s stance is the only exception. This other regional “power” has both ideological and economic ties with Venezuela. Therefore, by necessity and out of fear over its own future, the Argentinean government led by Cristina Fernández de Kirchner has been loudly supportive of president Maduro and his state terrorism.

After suffering the criminal efforts of their own government and the complicity of the other countries of the Region, Venezuelan protesting students -now joined by other sectors of Venezuelan society- remain in the streets. Their fire is far from extinguished. No one knows what lies ahead. Nevertheless, they have taught the whole world a lesson of what freedom and dignity really mean.

The views expressed on AustrianCenter.com are not necessarily those of the Austrian Economics Center.
hayek_admin2014-02-24T12:44:49+01:00