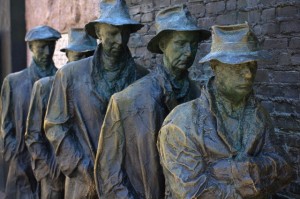 We spend hours in trivial pursuit and too little time on meaningful issues. At a time when 47 million Americans are on food stamps, 10.4 million people are unemployed, our nation’s debt has been growing exponentially and stateless terrorists are stalking people around the globe, we are fixated on ensuring that the Little Sisters of the Poor can receive morning after pills, folks in Colorado can smoke marijuana and those in New York cannot sip 20 ounce soft drinks. We worry about issues over which we have little control, like spotted owls and polar icecaps, while ignoring complex issues like understanding what it means, in a civil society, to live freely, under the rule of law. We want to please everyone and, consequently, too often please no one. Leaders in politics and the media concentrate on issues that divide us, rather than on those that unite us.

At the same time, we forget how insignificant we are and how large the world is. And we pay too little attention to the remarkable chain of events that had to occur in order that we might be here. The mathematical odds against any one of us being born are overwhelming. We are lucky to live in this age and even more fortunate to live in a free country.

Every person is unique, yet we all come from the same place – out of Africa. While no one knows how many left Africa and over what time periods, the consensus believes our ancestors left in waves, beginning more than 60,000 years ago. From those common ancestors was born the human race, as we know it. Given an average life span of eighty or so years, 60,000 years is a long time, but for an earth that is 4.5 billion years old, 60,000 years barely registers.

Ancestry is fascinating and history is more meaningful when we associate it with a parent, grandparent or great-grandparent. For example, President William Howard Taft is not widely remembered, but was President when my father was born in 1910. Ulysses Grant was President in 1873 when my paternal grandfather was born and Martin Van Buren was President at his father’s birth, in 1837, just over a hundred years before my own birth.

When we look at our lineage through the lens of compounded returns we reach the inevitable conclusion that we are all related. In a recent “Sunday Review” section of the New York Times, A.J. Jacobs wrote of his estimated 75 million cousins, a group for which he admits not buying birthday gifts! While his numbers sound far-fetched, they are not. We each have two parents, four grandparents and eight great-grandparents. The number from whom we descend doubles each generation, stretching back to the beginning of time. If we assume three generations per century and go back to the time of the Norman Conquest, or just under 1000 years ago, (and using the same mathematical exercise we associate with Warren Buffett) each of us descends from 536,870,912 27-great grandparents. The problem is that there are 7 billion of us today and there were only 300 million in the year 1000AD, according to estimates by the UN Department of Economic and Social Affairs. If we all descended from unique ancestors the earth’s population would have been 3.5 quintillion in 1066. Obviously, we are all related.

In my family, we have been able to trace some of our ancestors. For example, my siblings and I have at least one set of five-great grandparents common with both my mother’s and father’s side. William Greenleaf was appointed Sheriff of Suffolk County (Boston) in 1776 by the Provincial Congress. He and his wife, Mary Brown, had fifteen children, two of whom died as infants with a third dying at the age of 18. (The one who died at 18, Stephen, was a student of medicine and surgery at Harvard and died of a fever contracted when working aboard a prison ship in Boston harbor.) One daughter Priscilla married John Appleton, from whom my father descended. A younger daughter Rebecca married Noah Webster, my mother’s three-great grandfather. In all, the Greenleaf’s 12 surviving children produced 85 grandchildren.

One of my high school friends, Tom Korson, is also descended from the Greenleaf’s; so he is my 6th cousin, something we never knew when at school. Sorry Tom, but being a descendant of William Greenleaf is no big deal. A quick calculation would estimate that his descendants, in the succeeding ten generations, would number somewhere between half a million and five million – and very possibly more. Intermarriages, childhood diseases and the Civil War may have reduced those numbers, while larger families than I assumed would have increased them. Whatever the number, great, great, great, great great-grandpa Greenleaf would not be able to pick me out of a line-up, and he is only marginally important in my life, as he was simply one of 128 five-great grandparents I have.

As an indication of the power of compounded returns when it comes to families and descendants, I was asked about 25 years ago by a friend who was involved with the Mayflower Society of New York if I might hazard how many people living in New York State could trace their heritage to the Mayflower. Taking what I assumed was a wildly bullish guess, I said about 100,000. He told me that the Society’s estimate was seven million, or a third of the population of the State. I was flabbergasted until I started doing the math. There were 102 passengers plus a crew of 20 on the Mayflower. About half died the first winter. The remaining crew sailed for England in the spring. The rest stayed. Because of the laws of compounding, the numbers become very big when we go back 14 or so generations. Assume that 35 of the survivors had children. Further assume that for the first four generations each had four surviving children, the next five generations had three and the last four had two children. Those calculations would produce 34,836,480 in 14 generations – a lower estimate than that produced by the Mayflower Society in the 1980s. If one assumed that my grandparents’ and my parents’ generation had three surviving children, there would be 78,383,080 Mayflower descendants, or more than 20% of the U.S. population. Conclusion: Despite pretensions to the contrary, there is nothing very exclusive about the Mayflower Society.

Regardless of our mixed heritage, politicians like to place us in discrete compartments: Hispanic-Americans, Asian-Americans or African Americans, for example. But that is misleading. We are not Blacks, Caucasians, Asians or Latinos. We are Americans. We are segregated for political purposes. And politicians do it not just by race, but by creed, gender, age, sexual orientation and now by wealth and income. Doing so is divisive and serves no purpose, other than political expediency.

Pride in one’s nominal heritage is understandable and should be celebrated. Parades and festivities like St. Patrick’s Day, Puerto Rican, Jewish and Greek heritage days are an important part of our culture. Nevertheless, we should never forget we are all members of the human race and we Americans are citizens of a great nation whose melting pot reflects the commonality of our ancestry.

In the late 1950s and early 1960s, during the Civil Rights movement, my paternal grandmother – a woman who spent six years at MIT – told me that at some future time all humans would be of one color. Racial differences, she believed, would disappear. She is right, but “eventually” is a long a time. Politics should be color-blind today. Politicians (and much of the media) divide us because they find it more convenient to address the specific needs of a discrete group. Doing so makes for expedient political advantage. It avoids having to discuss the broader issues of what it would mean to live in a society where freedom is suppressed. Ideas are far more important than physical characteristics or personal preferences. It is the ability to think and to reason that differentiates us from other animals. The concept of liberty, the rule of law, the role of religion in society and the meaning of justice are the issues we should be debating. And, we should never stop doing so.

While unanimity in what we have in common as member of the human race is good, unanimity in ideas suggests a population that has stopped thinking for itself – the Eloi of H.G. Wells’ Time Machine. A gridlocked Congress encourages blame. And blame substitutes for debate. There is a tendency among the media, and with many politicians, to look upon failure to enact legislation as a negative manifestation of our political system. It is not. People operating in free markets do things. Governments set the boundaries and act as referee.

The critical element of a democracy is the ability to express one’s opinions. A society that freely debates issues is open. A society that condemns specific groups, or vilifies others is closed. It is on the differences in political philosophies that our discourse should be focused, not on the color of our skin, our ge