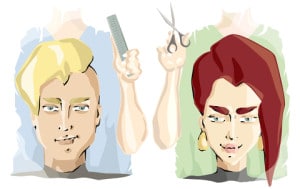 Wearing masks and bulletproof vests and with guns drawn, police in Orange County, Florida conducted the SWAT-style raid. Although the team included narcotics agents, they weren’t conducting a drug bust. They weren’t looking for illegal weapons or stolen merchandise either. They were on a mission to see if barbers were cutting hair without a license:

The officers ordered all the customers to leave, announcing that the shop was “closed down indefinitely.” They handcuffed the owner, Brian Berry, and two barbers who rented chairs from him, then proceeded to search the work stations and a storage room. They demanded the barbers’ driver’s licenses and checked for outstanding warrants. One of the inspectors, Amanda Fields, asked for the same paperwork she had seen two days earlier, going through the motions of verifying (again) that the barbers were not cutting hair without a license (a second-degree misdemeanor). Finding no regulatory violations or contraband, the officers released Berry and the others after about an hour.

According to Reason, two inspectors from the Florida Department of Business and Professional Regulation had already visited the Strictly Skillz Barbershop in Orlando and found everything in order. All of the barbers were properly licensed, and all of the work stations complied with state regulations. Yet despite the agency only being able to conduct such inspections once every two years, the agency brought over a half dozen cops with them two days later to conduct another inspection.

Fortunately, a federal appeals court recently ruled that “a criminal raid executed under the guise of an administrative inspection is constitutionally unreasonable.” The court had come to the same conclusion two times before, so the justices added, “”We hope that the third time will be the charm.”

The entire incident could have been avoided if Florida, and other states, would simple repeal all silly occupational licensing requirements.

Senator Paul Ryan also called for states and local governments to revise their occupational licensing laws in his recent proposal to decrease poverty and increase social mobility. But it’s not likely legislatures will be in a hurry to change these irrational requirements.

While removing the requirements helps the poor, many established businesses want to keep the licensing in order to protect themselves from competition.

Take, for example, the case of Jestina Clayton. Ms. Clayton grew up in a village in Sierra Leone where every girl learns traditional African hair-braiding. When she was 22, Clayton moved to Centerville, Utah and found a niche market among a small group of Utah parents who had adopted African children but didn’t know how to style their hair. When she began advertising her services, though, she was shut down because she didn’t have a cosmetology license. Getting such a license would require nearly two years of school and $16,000 in tuition.

A federal judge eventually ruled that Utah’s requirement that Clayton get a cosmetology license to braid hair was  “unconstitutional and invalid” because regulations are irrelevant to her profession. But for millions of other Americans, occupational licensing continues to serve as a barrier to work and self-sufficiency.

It’s time Americans take a stand against unreasonable licensing requirements. Citizens shouldn’t be required, at the threat of gunpoint, to show a license that says the government will allow them to style and blow-dry hair.

The views expressed on AustrianCenter.com are not necessarily those of the Austrian Economics Center.
hayek_admin2019-01-14T06:13:21+01:00