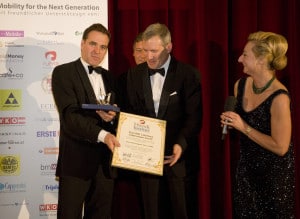 British historian Niall Ferguson has an excellent editorial in yesterday’s edition of The Wall Street Journal Europe comparing the freedom-loving American Republic that Alexis de Tocqueville found in the 19th century to the bureaucratic, over-regulated American Empire of today. “Unlike Frenchmen, [Tocqueville wrote], who instinctively looked to the state to provide economic and social order, Americans relied on their own efforts,” he writes.No longer. Americans have grown increasingly more reliant on the state (like their European brethren) and have “become dependent on Washington.” Ferguson, who last year received the Hayek Lifetime Achievement Award from the Austrian Economics Center and the Hayek Institut, says there’s still a chance to change things — if people do not become complacent.

The views expressed on AustrianCenter.com are not necessarily those of the Austrian Economics Center.
hayek_admin2019-01-14T06:45:37+01:00