White Knights in a Festival of Fools: The Tale of a Dangerous Encounter

Around the globe fundamentals are being ignored. Unsustainable debt keeps rising, the equity markets of dysfunctional economic unions seem to “thrive”, unprecedented monetary measures are implemented and a Leviathan state is emerging where “white knights,” in the form of shadow government operations, await on standby in order to bail out and rescue bankrupt operations. Welcome to a virtual reality where the concept of regeneration through catharsis (creative destruction) has been forgotten, and prevents the global economy to grow at a rate close to its potential. What better examples could we use than Japan, the whole EU (and especially its southern front) and lately China.

Speaking of China, how could we ignore that over the course of the last few months the white knights of the government have been rescuing companies unable to meet their bond obligations, such as Chaori Solar, Cloud Live Technology Group, Sunry Group, Dongsheng Construction, and a local government in the province of Ordos (that infamous ghost city) that refused to honor guarantees provided to local construction company? I wonder what will happen when the junk bond market that was launched in China in 2012 collapses? For how long will the placebo treatments of the central banks last?

For how long will the central planning attempts of the Chinese authorities be able to save its shadow banking system where thousands of trust products exist? Last year the re-appearance of the Huarong Asset Management (the entity used in the late 1990s to clean up the balance sheets of banks with the overwhelming non-performing loans) sent the first shockwaves in China’s entire financial system when it was used to bail out a Rmb 3 billion fund that was on the verge of defaulting.

A wave of bad debts (NPLs) in China may be approaching next year due to the unprecedented credit boom of the last eight years, precipitating a slowdown in the Chinese economy. In an era when some deregulation has taken place alongside the globalization of the Chinese economy, attempts to control it may simply be futile, as financial entropy will increase. The disequilibrium produced by such dislocation cannot be considered as part of creative chaos since it will be taking place during a downturn when assets are being depreciated and central banks’ ammunition will be deemed ineffective.

When the largest Chinese lender (Industrial & Commercial Bank of China) sells trust products promising 10% returns to investors (such was the case of the Credit Equals Gold last year), we are dealing with an unsustainable situation. The buildup of moral hazard not only undermines growth prospects but also accumulates additional dangers since fools will be sought after in order to buy the shares (in an IPO) securitized by the government-backed white knights.

A credit level of 200% of GDP (see graph below) is surely troubling when growth slows down, property prices decline, corporations are having trouble meetings their obligations 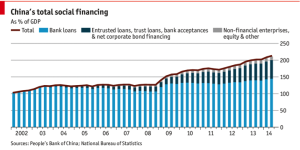 While by itself this debt-to-GDP ratio may not be that imminently alarming (given the structure of the loans as well as China’s foreign reserves), when we take into account that the cost of credit is about 7% and the economy is slowing down, then we can estimate that borrowers have to generate a cash-flow growth of about 14% in order to meet the interest payments. This is getting dangerous.

Given that all major Chinese banks trade below book value, we could conclude that both locals and foreigners are of the opinion that those banks’ loan portfolios are in trouble, and hence their market value is below their face value. As the situation gets tighter, the presence of white knights will become more evident. They will be borrowing from state banks in order to buy their bad loans and then securitize and sell them to the public.

This will be a dangerous encounter at the intersection of global illiquidity and volatility.