“Who is the Extremist?” 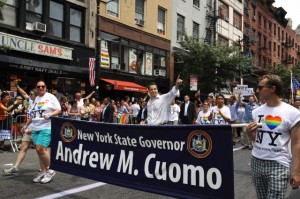 We live in a in a pluralistic country. New York State, with a population of about 19.6 million people encompasses people from across the political, economic, social and religious spectrums. Governor Cuomo acted like an elitist and nativist when he said that “extreme conservatives who are right-to-life, pro-assault-weapon, anti-gay…have no place in the state of New York, because that’s not who New Yorkers are.” He may be Governor, but does that give him the right to say who New Yorkers are? No matter where one stands on those issues, the Governor’s declaration was extreme. When Mayor de Blasio provided support: “He was absolutely right to say what he said,” it meant that he agreed that intolerance, when expressed by Mr. Cuomo, is perfectly okay.

One is reminded of Senator Barry Goldwater’s famous admonition: “Extremism in the defense of liberty is no vice. Moderation in the pursuit of justice is no virtue.” Certainly Governor Cuomo was not defending liberty. He was doing the opposite. Those words of Mr. Goldwater might be amended: ‘While tolerance of intolerance is no virtue, intolerance toward those with whom one disagrees is a vice.’ That lack of tolerance is especially meaningful when it is expressed by public servants. New   York City is a polyglot city in a polyglot state and nation. Our leaders, who are elected based on their stands on issues, are expected to represent all the people. They should seek unity, not promote division.

Here is my personal take on the three “extreme” conservative positions Mr. Cuomo finds so offensive. On the first, I have mixed feelings. I very much support the right of a woman to have control over her own body, but at the same time it seems inescapable to me, from a scientific perspective, to suggest that life begins at any time other than at conception. If not then, when? Abortion is a serious matter. A few years ago, the idea was that abortion should be “rare, safe and legal.” That seems a sensible balance. In terms of assault weapons, I have no personal interest in weapons. (In truth, I do own an old flintlock that I bought 45 years ago for $75.00) The last time I fired a weapon was in the army, fifty-two years ago. But I appreciate the importance and relevance of the Second Amendment and I recognize that many enjoy the sport of hunting. Tight gun controls in cities like Chicago and Detroit have not prevented shootings. While we may disagree on the subject, I see no reason to impose my values on them…and no reason for gun advocates to impose theirs on me. We should be able to live harmoniously. I am not sure what is meant by anti-gay. Prejudice, without reason, is immoral and against the values I have tried to instill in our children, but if the meaning is meant to disparage traditional families, I believe they are wrong. Research supports the idea that children brought up in families with a mother and father have better chances of success. While a two-parent household is not always possible, it should be the goal, and certainly should not be disparaged.

What I don’t like is intolerance, whether it is uttered by radical Islamists or by people like Andrew Cuomo, Bill de Blasio or Rush Limbaugh. Mr. Cuomo may claim that right-to-lifers, gun advocates, or anti-gays are intolerant. Some of them are, but so are many on the contra side of these issues. Imitating them, in terms of expressing extreme views as did Mr. Cuomo, does little to further civil debate. There is enough intolerance in the world as it is. The last thing we need is a political leader driving the wedge deeper into the chasm that divides us.

Accusations of extremism, which have been largely responsible for the division that divides us, have become more acute under Mr. Obama. On October 31, 2008, he declared, “We are five days away from fundamentally transforming America.” Why would he say that? Some might excuse it as simply campaign rhetoric in the last days of a Presidential campaign. Perhaps that is so. But it disturbed me at the time and still bothers me today. While we have flaws, we have been the most liberal and tolerant nation in history. Political leaders should ensure that does not change. We can always become better. But there is, and there never has been, any country as welcoming to peoples from all over the world, nor as free, as ours. If Mr. Obama had said he wanted to improve on what we have, I could have accepted that, but that is not what he said.

There is an asymmetry between declamations of those on the far Left and those on the far Right, which is disturbing. The former often express a visceral hostility, which is intended to marginalize their opposition in the style of Saul Alinsky. One only has to recall the demonization of Sarah Palin in 2008 or the vilification of Mike Huckabee last week – in both cases taking words out of context and relentlessly belittling them. Likewise, Bush lied; Obama tells falsehoods. Lies and false statements are too often ignored by mainstream media when they are uttered by those on the Left. Lies about Benghazi and the IRS are examples. Elizabeth Warren’s lie about her heritage was another. So was Wendy Davis’s lie about bringing up her children as a single mother. Conservatives would have been scalded for making such false claims.

We are truly, as I wrote above, a polyglot nation. People have emigrated to these shores from virtually every nation on earth. We are more racially and ethnically diverse than any other nation. Intermarriage between races, ethnics and creeds has made us a unique people, unlike any other nation. A hundred or two hundred years from now the genetic differences between us will be even less. From the start, the United States was unique in its outreach to people from all lands. E Pluribus Unum (out of many, one) was the motto recommended by the committee Congress appointed on July 4, 1776 to design the Great Seal of the new United States. The founding fathers provided an explicit plan for government. But implicit, in what they said, wrote and did, was a moral code, or a sense of values, if you will. Over time that moral code has changed, reflecting input from new immigrants. However, many of the lessons taught by the founding fathers have as much relevance today as they did 238 years ago – our essential rights embedded in the Bill of Rights; checks and balances, inherent in the Constitution; property rights; the rule of law; the emphasis on the individual; the separation of church and state, but with an emphasis on the importance of religion and God. An American culture should keep what is best from our past and gradually improve it by adding what is best from other cultures. Tolerance and respect for those of differing opinions are near the top of those lists.

The concept of fundamentally transforming a people and a nation is extreme. Standing up and speaking out for ideas in which one believes is a right provided from our founding. It is not extreme. What makes someone an extremist is not so much their beliefs; it is the adamancy with which they proclaim them and the total disregard they have for those of differing opinions. Extremism can be seen in the deprecation of elites toward their political opponents, and their inability to engage in debate. It was Governor Cuomo who was the extremist; it was not the conservatives who offer differing opinions.

The views expressed on AustrianCenter.com are not necessarily those of the Austrian Economics Center.
hayek_admin2014-01-27T13:23:13+01:00