Why France is drowning 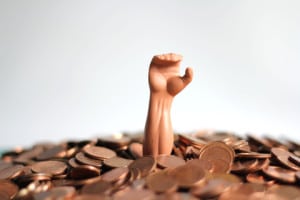 In the 1980s, Milton Friedman used to declare that the French economy was a mystery to him: “The French government gets everything wrong, and still the country is working”. He explained such a contradiction between a statist economic policy and a decent growth rate, by the extent of fraud and black market trade. Because taxes were not paid and excessive regulations were not applied, French entrepreneurs could still produce and innovate.Alas, the black market is no longer enough these days to keep the French economy growing. Describing the current trend, media pundits use a paradoxical expression: negative growth.

As the French population continues to increase by about 1% a year, negative growth means that per-person income is actually declining. The impact of this slow and destructive process is somewhat softened for middle class families who have inherited capital, and most often a house in the countryside, from their ancestors. For younger French people, without local roots, negative growth leads to a total lack of opportunities and no jobs. Nowadays, even bourgeois children have increasing difficulty to find decent work: unpaid internships are becoming a social norm for well educated kids.

The French economic collapse cannot be understood solely through criticism of the current socialist government. True enough, François Hollande is not helping by declaring, when first elected, that the world of finance is his personal enemy and proclaiming, two years later, that he loved entrepreneurs. In case Hollande were a true socialist, he would at least be predictable and entrepreneurs would adapt; much more destabilising, however, is that Hollande happens to be totally inconsistent and full of contradictions. His government has promised to reduce the public deficit, but instead have increased it year after year. Hollande announces in a grandiose manner that he will simplify the life of the entrepreneurs, but the labour code, that currently runs to 3,648 pages, has increased under his watch. Yet, these recent unhelpful policies do not explain France’s unfolding tragedy: economic decline actually started in the 1980s when the government failed to perceive how globalisation would destroy the old French way of doing business through monopolies, closed markets and crony capitalism.

Instead of choosing a leader in the mould of Margaret Thatcher or Ronald Reagan, France elected a series of statist Presidents, from the Left and Right. Instead of deregulation and flexibility, all political leaders in office, without one exception, increased taxation and regulation. The climax in this counter-intuitive trend was the 35-hour working week, brought in by Martine Aubry in 2000, and reduced from 39 hours under Mitterand. The logic stands on the flawed lump-of-labour theory, which states there is a fixed amount of work in an economy; restricting overtime therefore creates jobs for the unemployed. The law still stands, despite its ineffectiveness, because no government dares to erase it for good.

We now need to go beyond Friedman’s hypothesis to understand why  French entrepreneurs still remain able to generate a certain amount of growth. The French economy does not drown for two seminal reasons. First, a limited number of very large companies  have proved able to bypass political restrictions by becoming truly global. Armaments, transportation, chain stores, luxury goods, banks, insurances companies do most of their business abroad and earn most of their profits abroad as well. Their headquarters and top management remain in France, usually in Paris to benefit from the positive image of the Made in France label. Although their performances are remarkable on the global market, it is noticable that all these companies were founded eons ago. Among the 40 leading French companies which dominate the Paris stock exchange, none of them is less than 50 years old. Entrepreneurship in France is more based on a well managed inheritance than breakthrough innovation.

The second pillar of  France’s relative economic resilience is the European Union and the Eurozone. Germany being first among them, European countries are the most prominent customers for France. French statism is thus compensated by a free market oriented European Union. Europe limits the French government’s temptation to regulate and nationalise everything. In the same vein, the Frankfurt-based Central European bank forbids the centuries-old French love affair with inflation followed by devaluation. The Euro may look fragile, but the French Franc was worse.

For 40 years, Europe and the French 40 global companies have acted like buoys to keep France above water. These buoys may not suffice anymore to keep the corpse afloat: we are slowly drowning. The process may be too slow to provoke a national sense of urgency. True enough, it has become all the rage to talk about reforms but no political leaders and few commentators dare to be specific about the content of these reforms. In a nutshell, France needs a Schumpeterian revolution: “creative destruction”. The current Prime minister, Manuel Valls, strong on free market rhetoric, is not going in that direction at all. If the French government really meant business, it would make two radical and significant decisions: abolish the 35 hours a week limitation and allow exploitation of shale gas, which is abundant and dormant. Both happen to be brakes on economic growth and are political taboos; Valls has repeatedly confirmed that he will not go there. Not putting the blame squarely on political cowardice, we must admit that it is nearly impossible to be elected in France with a free market agenda, when one-third of the population lives on public work or public subsidies.

This explains why, for the first time in French history, millions of young entrepreneurs are leaving their homeland to start a new life and new businesses abroad: the United Kingdom, the United States, Canada, China are favourite destinations. Such a massive and voluntary exile never happened before. It is estimated that three millions French citizens, mostly young and active, have chosen to remain French but not in France. They will return to their homeland for holidays, to visit their older parents and for retirement. France’s economic future increasingly appears to lie outside of France.

The views expressed on AustrianCenter.com are not necessarily those of the Austrian Economics Center.
hayek_admin2019-01-14T06:10:29+01:00