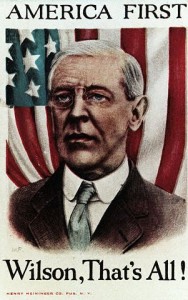 Because of myriad scandals inflicting his second term, it has become common for many on the Right to compare Barack Obama to Richard Nixon. Both had been re-elected with majorities; though Mr. Obama’s margin of victory paled in comparison to Nixon’s. While the New York Times referred to Mr. Obama’s re-election as a “resounding victory,” the facts are that he won with a smaller percentage and with fewer votes than he did in 2008. Mr. Nixon, in contrast, won with 60.7% of the popular vote, a 23.2% margin – the fourth largest in U.S. history. Despite having risen to the highest office in the land, both men were (are) loners, relying on small cadres of carefully selected advisors. Both were (are) mistrustful of Congress and abhorred small talk; though Mr. Nixon had served in both the House and the Senate before becoming Eisenhower’s Vice President. Both men used the IRS as a means of intimidating their enemies. Both attempted to muzzle opposition in the press.

Woodrow Wilson is the other president to whom Mr. Obama has been compared. There are notable differences, of course but comparisons of the 44th President to the 28th are intriguing. They are the only two Presidents, according to Michael Barone, who won second terms with smaller margins in the Electoral College than they did in their first terms. Neither man had much preparation for the Presidency. Mr. Wilson had been a professor of jurisprudence and political economy at Princeton, before becoming president of the college (1902-1910). He then served as Governor of New Jersey for two years. Mr. Obama had been a community organizer, law professor, a State Senator for six years and a U.S. Senator for four. While Mr. Obama was elected by a majority of the electorate in both elections, Mr. Wilson was not in either. In 1912, Theodore Roosevelt formed the Bull Moose Party, which garnered 27.4% of the vote, spelling defeat for William Howard Taft who won 23.2%. Wilson won with 41.8%. He won re-election in 1916 in a tough battle against Charles Evans Hughes, with 49.2% of the vote.

Both men were (are) agents of change. Mr. Wilson spoke of a “New Freedom,” a vision of social and economic renewal. Mr. Obama pledged to “remake America.” Both men entered office with clear majorities in both Houses. As both men had taught at the college level, both were considered to be intellectuals. Mr. Wilson, as the only PhD to occupy the White House, actually was one. Both had productive first terms.

In Mr. Wilson’s first four years, Congress created the Federal Reserve, the Federal Farm Loan Bank and the Federal Trade Commission, and it passed the Clayton Antitrust Act. With passage of the Revenue Act of 1913, Mr. Wilson signed into law the nation’s first peace time income tax. In Mr. Obama’s first term, Congress passed the American Recovery and Reinvestment Act of 2009, an $800 billion stimulus plan. It passed the Wall Street Reform and Consumer Protection Act, better known as Dodd-Frank. And it passed the Patient Protection and Affordable Care Act, commonly called ObamaCare. A significant difference is that all the major legislation enacted during Wilson’s first term passed Congress with bipartisan support, while Mr. Obama’s signature programs did not garner a single Republican vote. It is interesting to note that the names put on legislation today deceptively mask the reality of their intent.

It is second terms that so often create problems for Presidents. Their last election is behind them. Having every word and movement parsed by a relentless Press creates a need to be constantly vigilant. Victory provides release, which too often devolves into arrogance. Scandals that had been hushed, either deliberately or by silent accord are exposed. But, as the old saying goes, truth ultimately outs. It happens in almost all second terms. One thinks of Reagan and the Iran-Contra scandal; Clinton and Monica Lewinsky; Bush II and the fallout from Iraq. That was what happened to Nixon. The Watergate break-ins occurred in May and June of 1972. A year later Senate hearings began, but it wasn’t until August, 1974 that President Nixon resigned in disgrace.

In 1916, Wilson campaigned on the slogan, “He kept us out of war!” Like, FDR in 1940, he had to know he could not keep the promise. German submarines had been sinking American ships since the Lusitania went down in 1915. After the election, but before the inauguration, the Zimmerman telegram was intercepted, which alleged Germany’s attempt to enlist Mexico on the side of the Axis. On April 2, 1917, America declared war on Germany. Two months later, on Flag Day (June 14), the President, while explaining “we are not the enemies of the German people,” helped enflame anti-German sentiment: “The military masters of Germany denied us the right to be neutral. They filled our unsuspecting communities with vicious spies and conspirators and sought to corrupt the opinion of our people in their own behalf.” The consequence was further ostracism of German-Americans, as stories of Lou Gehrig’s childhood in New York so vividly illustrate. More important were the enacting of the Espionage Act of 1917, the Sedition Act of 1918 and the Immigration Act of 1918; the latter caused the deportation of recent Russian immigrants back to the new Soviet Union – and most assuredly to the Siberian Gulags and probable death.

Among those jailed by an aggressive Wilson Administration was Eugene Debs, a candidate for President under the Socialist Party of America banner in 1912. He was arrested in 1918 under the Espionage Act for a speech. (Mr. Debs was granted amnesty by President Warren Harding in December, 1921.) Attorney General, A. Mitchell Palmer became so aggressive in pursuit of violators of the Espionage and Sedition Acts that Massachusetts District Court Judge George Anderson felt compelled to declare, in a statement that rings ominously prescient today, “A mob is a mob, whether made up of government officials acting under instruction from the Department of Justice, or of criminals and loafers and other vicious classes.”

It was in pursuit of his Fourteen Points and in his adamant and desperate defense of the League of Nations following the Armistice that Woodrow Wilson most resembled the arrogance of Mr. Obama. Despite his PhD thesis that had been written about Congressional government, Wilson found it impossible to work with Massachusetts senior Senator Henry Cabot Lodge. The peace that followed the end of World War I brought strife to the Wilson White House. Instead of working with the Senate, he tried to bypass it by appealing directly to the people. After almost six months in Europe where he attempted to manage the peace process, he toured America trying to sell his Fourteen Points and his concept for a League of Nations. On the trip he suffered a stroke and never really recovered. The upshot was a Treaty of Versailles that was never signed by the United States and a League of Nations that the U. S. never joined.

Woodrow Wilson was a product of the Progressive movement. Like today’s Leftists, turn-of-the-century Progressives considered themselves intellectually elite. Wilson wanted his compatriots to move beyond the Declaration of Independence. “It is,” he said, “of no consequence to u
s.” Paul Rahe, in the April 11th edition of the National Review , wrote: “For the rights of individuals celebrated in that document [the Declaration of Independence] and for the limits on government implicit in its celebration of those particular rights, he [Wilson] had no use.” Worse, like the majority of Progressives of that era, he embraced eugenics and racial theory as a truth taught by science. Consequently, a month after his inauguration in 1913 he segregated the civil service. Earlier, as Governor of New Jersey he had signed a bill making mandatory the sterilization of criminals and the mentally retarded. Government, as Wilson once put it, “should be accountable to Darwin, not to Newton.”

In a 2001 radio interview, Barack Obama commented on the civil rights movement and the Supreme Court. He said that the Warren Court had not broken “free from the essential constraints that were placed by the Founding Fathers in the Constitution…that generally the Constitution is a charter of negative liberties.” To achieve “redistributive change,” the limits of the Constitution would have to be overcome by the Court or by Congress. Woodrow Wilson wanted a “living Constitution,” unmoored from its ascertainable meaning and constraints. Mr. Obama wants a living Declaration of Independence, one that acknowledges that “self-evident truths” are an evolving thing. In The Audacity of Hope , Mr. Obama wrote that “…the very idea of ordered liberty is a rejection of absolute truth.” In his Second Inaugural, the President hinted at his postmodern view toward the founding documents: “Being true to our founding documents does not require us to agree on every contour of life. It does not mean we all define liberty in exactly the same way or follow the same path to happiness.” His is the argument for moral relativism.

While technologies and mechanics change, the beauty of the Declaration of Independence and the Constitution is that they are based on truths that are self evident and eternal, that all men are created equal and that man is endowed by his Creator with rights that are unalienable. Those precepts cannot and should not change at the whim of the nation’s leaders. Progressives today may eschew the concept of Social Darwinism, but they are no less confident in the righteousness of their beliefs. Mr. Obama subtly – or perhaps, not so subtly – argues for the welfare state. However, his reasons risk altering the inherent contract of citizens to their government. The pursuit of happiness has nothing to do with material happiness and everything to do with personal freedom. Abraham Lincoln derided the underlying p