The world economy may be entering into treacherous territory. Central Banks and policy makers seem to have misdiagnosed the credit problems and applied the wrong medication. We are referring of course to that fact that toxic assets such as derivatives and the re-hypothecation of securities are still around and dominate the markets. Quantitative easing may have helped in avoiding another global depression for the time being, but has not eliminated the possibility the next downturn may have serious consequences because the root causes have not been addressed

The application of negative interest rates from Asia to Europe and the talk of “helicopter money” signify the desire to keep our heads in the sand rather than face the reality that monetary measures are the wrong tools for the wrong diagnosis. Monetary measures (such as interest rates) affect monetary targets (such as the price level), while real measures (such as productivity increases) affect real targets such as employment.

In a recent report the IMF tried to address global financial safety net issues. I am just wondering if such a term is an oxymoron given the $700 trillion dollars of notional liabilities in the derivatives structure, along with the collateral holes in the global financial system. The latter has been dominated by the shadow banking system and, as the figure below shows, the capital flows in the shadow system have been rising. Along with them, liabilities are rising and the safety net is eroding. 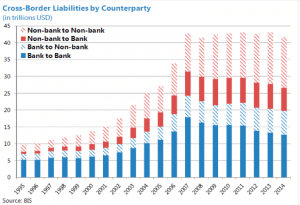 The inability to address the above issues has been convoluted the global monetary system and as a result the financial cycle is leading the business cycle rather than vice versa. That has led to rising financial stress, liquidity problems, systemic risks, volatility, and the brewing of the next storm.

In the IMF report we read an indirect admission that the resources (reserves, swap lines, financing agreements, the IMF itself) do not suffice as a safety net, given the amount of accumulated liabilities.

We have commented before on liquidity issues. It seems that there are not enough new bonds to satisfy repo and swap activities. That has led to peculiar rates in the debt markets where newer issues command a premium. Furthermore, it has led to failures in unfulfilled trades, as the Wall Street Journal recently reported. 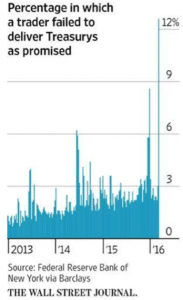 As a result, there are days that the repo market looks like an inverted pyramid where those who provide the cash in a repo transaction are paying the lenders of the debt instrument an interest rate just to get in hold of that paper! (Rather than being paid for the cash they provide in exchange for the debt instrument). Just a few days ago we saw a rate as negative as 2.6%!

Overall, the debt market shows signs of stress. When Slovenia (with huge economic problems) borrows at negative rates, then not only you have a convoluted situation but one that is schizophrenic. When central banks are pushing negative interest rates, by default they are slowing down the growth rate, which is anemic to start with. Moreover, the double talk of not wanting deflation and at the same time pushing for negative rates has the potential of misallocating capital even more, by creating bubbles in paper assets while discouraging capital investments. I assume it’s the new phase of a currency war that could end pretty badly for a number of asset classes.

My fear is that negative rates will deteriorate the velocity of collateral (the most important velocity in monetary affairs), a subject we have written about in the recent past. As the collateral velocity – and subsequently the money velocity – declines, the hard assets (such as precious metals) will obtain an additional dimension on top of that of a safe haven, especially as the pool of paper assets declines and hence liquidity issues take front stage.

The result of is that pension liabilities will balloon (exacerbating a brewing pension crisis in public and private funds), US rates on Treasuries probably will drop, and volatility will rise. We are deceiving ourselves if we believe that monetary tools can address structural and regulatory issues.

What then should investors do? Calls on the volatility index may not sound that bad.

You can find more information on BlackSummit Financial Group

The views expressed on AustrianCenter.com are not necessarily those of the Austrian Economics Center.
hayek_admin2019-01-14T05:57:04+01:00