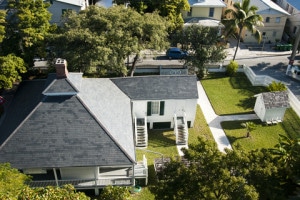 I once knew a man who was finishing his basement so that his daughter and son-in-law could live there. I spent a lot of hours down there with a nail gun before the city planners nixed the project. My in-laws in Modesto, California, had to move out of their house into a mobile home on their own farm, because their kids needed a place to live. The law, for some reason, allowed them to put a mobile home there if seniors would be living in it, but not to accommodate a young family.

In run-ins with zoning laws, ordinary people encounter the perversity of government firsthand in ways that should make them receptive to the message of freedom and property.

You see, modern American society does not have a free market in land. Government interference with land use causes many of society’s problems. For example, in recent decades, people have started moving out of richer states into poorer ones, as high-productivity metropolitan areas refuse to accommodate population growth, driving housing prices and rents sky-high. While expensive real estate reflects high demand, the distortions originating with urban planners have made it difficult for young people to get a start in life. Artificial limits on supply, including zoning laws, building height restrictions, parking requirements, and rules on maximum occupancy and minimum lot size, drive prices higher.

Without restrictions like these, real estate developers could build more high-rises and townhomes. Housing supply would rise, prices and rents would fall, more affordable cities would attract more people, and metropolitan productivity would raise national GDP.

Zoning can be a form of class warfare when rich people deploy government power to keep poor people out of their field of vision. In the early twentieth century, some officials used zoning laws to exclude racial minorities from white neighborhoods. Today, class has replaced race as a main motivator for exclusion. Even when officials claim other intentions, zoning’s effects are the same. Government interference with land use blocks people from stretching scarce dollars by sleeping more people in a room, for example, or converting single-family homes into multifamily homes. High property taxes and onerous construction codes make housing less affordable for everyone, especially the poor.

Zoning also harms the environment by forcing people out of cities, where they live less environmentally friendly lifestyles. Segregating residential, industrial, and commercial land use forces people to live farther from the places where they work and shop, causing more automobile dependency, asphalt, and urban sprawl. A free market in land would not eliminate sprawl, of course. Some people want a house and a yard. But the rise of suburbia in post-WWII America was driven not only by preferences, but significantly by zoning laws.

This Land Is Their Land

Zoning tends to have an antidensity bias, but it often frustrates lovers of the rural life, too. When I moved to central California two years ago, I took a liking to the orchards and vineyards that surround the city, and looked for places in the countryside. That should have been easy. Agriculture generates low value per acre compared to residential rents, so people like me, with city jobs but a taste for the rural life, could easily offer landowners more than the land’s agricultural opportunity cost.

Unfortunately, the Fresno County Division of Public Works and Planning has zoned most of the land here “exclusive agricultural” in order “to protect the general welfare of the agricultural community from encroachments of non-related agricultural uses which by their nature would be injurious”—how, pray tell?—“to the physical and economic well-being of the agricultural district.”

The name of this regrettable agency contains the telltale word planning. It is curious how often America fails to learn the lesson of its own victory in the Cold War: Markets are better than planning. Read a zoning ordinance and you will quickly get the strange sense of reading a Gosplan document. Why must non-agricultural operations be limited to 10 percent of a plot of land and three employees? Why are riding academies permitted (subject to director review) but arts and crafts schools prohibited? Why not leave such decisions to the market?

Externalities and Other Canards

The only legitimate economic rationale for zoning is that land use often has positive and negative local externalities. What I do with my land can affect my neighbors’ quality of life. If I fill my front yard with flowers, the whole street benefits. If I fill it with trash, I spoil my neighbors’ street views and property values. A factory next to a suburb is an eyesore. A cafe may enliven a neighborhood, but patrons compete with residents for scarce parking. In the face of local externalities, the usual theorems about market efficiency cease to hold, and zoning laws can, in principle, raise social welfare by mitigating activities with negative externalities and/or encouraging activities with positive ones. Possibly, though I doubt it, the Fresno County Division of Public Works and Planning could find some feeble argument from local externalities to justify allowing riding academies but not arts and crafts schools in “exclusive agricultural” districts.

But there’s a better way to deal with externalities, elucidated by Nobel Prize-winning economist Ronald Coase in his 1960 article “The Problem of Social Cost.”

Coase considered, as an example, the problem of a rancher whose cows sometimes stray into the neighboring farmer’s field and destroy his crops (a negative externality). Does the farmer have a claim against the rancher, or do the rancher’s cows have a right to roam where they will? Should fences be built? Should one of them halt operations? What is the efficient solution? What is the just solution? Coase claimed no insight about justice, but he showed why, if efficiency is our goal, it does not matter whose side the court takes, as long as (a) rights are defined clearly, and (b) they are tradable.

The socially efficient solution here is for the rancher to halt operations. Fencing is too expensive. The rancher’s profits are lower than the farmer’s, and too small to offset the damage to crops.

. . . then the farmer will shut down, either because—if a judge rules against him in his dispute with the rancher—crop damage is causing him to lose money, or because—if a judge rules in his favor—the rancher buys him out. Whatever the efficient solution is, Coasean bargaining will find it, once the law clearly defines property rights in causing, or in being free from, externalities.

Bargaining Our Way to Pleasantville

Zoning laws should be replaced by a free market in land, with Coasean bargaining to deal with local externalities. The solution would be imperfect, due to transactions costs. But the system would get better over time, as entrepreneurial developers wanting to gentrify or commercialize neighborhoods would learn the best ways to acquire, from residents, the appropriate rights—perhaps involving complicated option contracts or Elinor Ostrom-style solutions to commons problems. And all of these alternatives would be supported by common-law approaches to dispute resolution and contract, which have been thoroughly crowded out by municipal codes.

By contrast, centrally planned systems tend to ossify over time, as they grow increasingly more starved for the market-pricing information that could provide signals about the efficient use of resources. Of course, the local knowledge of people on the ground is the foundation of community. That too is lost when town planners purport to know more.

Market flexibility is especially important now because technology wants to reorganize cities. Already, in an age of smartphones and laptops, when one hardly needs bookshelves or desks, young people with large student loans who want to live in Manhattan might find six-in-a-room lifestyles quite tolerable for a few months or years. Let the market decide. On the other hand, solar power and mobile data could open up attractive lifestyles in the foothills of the Sierras if they weren’t zoned “exclusive agricultural.” Let the market decide. Let the people decide.

In the future, cheap driverless taxis will make acres of urban parking obsolete. Even the home kitchen might become optional when driverless cars offer cheap 24-7 delivery of hot restaurant meals. Let the market decide. We need to get the old zoning boards out of the way and leave people and markets free to discover the lifestyles that best suit them in the 21st century.

The views expressed on AustrianCenter.com are not necessarily those of the Austrian Economics Center.
</di